I am pleased to announce I will be speaking at the upcoming inaugural Project Virtual Conference, a free global online conference that is dedicated to Microsoft Project, Project Server and Project Online that will be running for 24 hours.

For those of you that may have missed it, the Project Virtual Conference is a completely free, virtual conference that has been organised by members of the Project community (Prasanna, Cindy, Treb, Ben, Rod, Paul, Julie and Vadim) in their spare time.

The schedule includes a raft of expert speakers including Customers, Partners, Product Team and MVPs. From a quick run through there are some great sessions in there, including a keynote from Sajan Parihar.

My session is entitled Leveraging Nintex for Project Management Nirvana

With platforms such as SharePoint, Project Server and Office 365, organizations have never before had such rich options for managing projects. Ensuring these platforms can be customized to meet your specific needs is paramount. In this session we will take you through how you can leverage Nintex products for SharePoint, Project Server and Office 365 to reach your own organizational Project Management Nirvana.

The fun starts on October 22 at 2:00pm UTC and then runs for 24 hours straight. Oh and did I mention all this great content is free?

If you haven’t already, register today at https://projectvirtualconference.com/register/ and I look forward to seeing you on the day.

For the past few days I was lucky enough to attend the Microsoft Ignite conference in Chicago to hear about all the new stuff coming from Microsoft and I have to tell you, it’s pretty exciting.

The conference itself was massive, over 23,000 attendees as a result of merging Tech Ed, Microsoft Management Summit, the SharePoint Conference, Project Conference, Exchange Conference and Lync Conferences together. If I had to think about it, I would say it was a little too big and Project looked to suffer for it, but their was some great content.

The keynote was massive, but seemed a little disjointed. Talking to a number of people, it felt as if all the good stuff had been announced earlier or at Build the week before. Ignoring that though, there was some great demo’s from Julia White and my ex-colleague Ben Walters. The highlight had to be Gurdeep Pall (sorry Ben) , who was funny and engaging.

This conference was to be the coming out party for SharePoint 2016, and whilst it’s still early days for the on-premises product, there were some key announcements, including:

I’ve heard about the merging for a while now for Project Online and it’s a pretty impressive achievement. When a PWA instance was first created, Project Online used to provision a Project DB per tenant. So if there were 100’s of tenants, there would be 100s of databases, all needing to be managed, maintained etc. driving up the cost of goods sold (COGS). Now between going live and early 2014, the Project team managed to consolidate all these databases and fold them into the SharePoint Content DB’s without a single incident or impact on availability. A massive achievement for the team at Project.

From a Project perspective, there were a couple of great sessions where with demo’s and announcements of new capabilities including the new multiple timeline support for Project Pro and the new Resource Engagements capability, both of which I will cover in a bit more detail in other posts.

Finally, there was an interesting session on Project Online Customisation Best Practices, which gave some great insights into how to performance tune Project Central, although I am not sure I agree that taking the web parts off the page or removing indicators is the way to go.

The session was timed to highlight a great new whitepaper published by Microsoft on the subject of Project Online Perf, covering:

You can read more of the white paper at https://support.office.com/en-us/article/Project-Online-performance-best-practices-12ba0ebd-c616-42e5-b9b6-cad570e8409c?ui=en-US&rs=en-US&ad=US&fromAR=1 or at http://aka.ms/projectonlineperf

All in all Ignite was really big, full of sessions and it’s going to take me a few days physically to get over it, but it was great to catch up with old friends, make new ones and learn. I am looking forward to Ignite 2016!

I’ve posted before about how fantastic the Microsoft Project & SharePoint Conferences are, well a couple of months ago Microsoft announced that they were merging those two conferences along with Exchange, Lync, Office 365 and pretty much everything in between into a new conference called Microsoft Ignite.

The Microsoft Ignite team have been hard at it planning what the event will be and it looks to be a cracker, but in a break from usual conferences, the team at Ignite want to hear from the community at large as to what content they want to see in the conference and have put up a survey at http://ignite2015.eventpoint.com/survey/callfortopics to understand the kind of content you want to see.

The team are also holding a series of TweetJams on twitter to engage with the wider audience. If your not sure what a TweetJam is, you can read more here.  But essentially, a TweetJam is a public discussion on twitter where posts are marked with a hashtag to allow the discussion to be tracked. Typically they have a host and a hashtag to follow. You can read more about TweetJam’s  here.

However I wanted to call out the Project specific TweetJam which is happening on the 9th December, the details of which are below:

The team would like feedback on the following during the TweetJam, so get thinking :)

Finally, if you haven’t already, registration for the Ignite conference is now open, I would recommend you taking a look at this landmark conference and move heaven and earth to get there.

Hot off the press this morning, the session video’s for the Project Conference are now available to watch via Channel 9.

Here are a couple of my favourites so far (and I may be biased)..

Future of Business Productivity Keynote – Check out the great demo with the Nintex Workflow for Office 365 app.

My session Implementing your organizational process in SharePoint, Project Server and Office 365 with Nintex

And finally, the great vision keynote where the future direction of the business is revealed and Ludo and Heather show off their comedic skills whilst doing some great demos

It’s been a little over a week since the Project Conference in Anaheim finished up and what a conference it was. It’s always great to meet up with the Project Community and catch up on what’s happening, it’s also the only place I know that you can wax lyrical about Project Server without people looking at you as if you’re strange

Anyway, I thought I would share some of the highlights with you.

First up the keynote, there were some great demonstrations, announcements and in a first reveals about future directions and investments for Project. A key announcement was the introduction of the new Project Lite SKU for Project Online, a $7 a month licence of Project Online targeted at users who don’t need all the capabilities of Project Online, but do need to complete timesheets, update tasks, view schedules and interact with collaboration sites. The Project Lite SKU will be available from the 1st May 2014.

The other big announcement in the keynote was a new SQL Server Integration Services (SSIS) connector which can consume oData feeds (as provided by Project Online), the SSIS package can then write out to a database hosted in Windows Azure that you can then use SQL Server Reporting Services (SSRS) to create enterprise reports.

Microsoft are pushing apps in a big way and there are some great apps out there, it was great to see the Publish All Enterprise Projects app in the keynote (click here to learn more) followed shortly afterwards by a pretty deep demo of Nintex Workflow for Office 365, one of the products I am responsible for in my non project day job at Nintex

(thanks Jakob for the better picture). 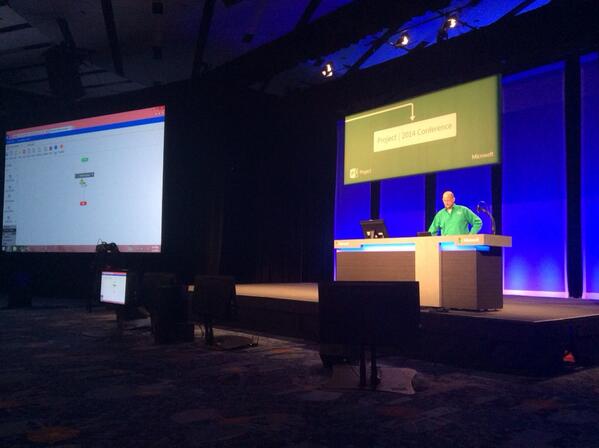 The sessions at the conference were great, with a diverse range of speakers from customers, partners and the engineering team. I personally enjoyed a few of the workflow sessions and was excited to see so many people getting on board with Demand Management in 2013. It was also great putting faces to names, and of course catching up with old friends and fellow Project MVP’s from around the world.

I was lucky enough to present a session on behalf of Nintex on how our products could be used to implement organisational process. The session went really well with a great turn out, some good questions and all five demo’s workflow flawlessly.

For those of you that came along to the session, thank you, as a final reminder, all the links from the session can be seen at http://bit.ly/nintexpc14. I have a couple of videos of the demo’s I showed that I will push up in the next couple of weeks.

All in all it was a great conference, lots of information, lots of networking, lots of preparation and whilst there, lots and lots of work. Thanks to everyone at Microsoft and Dynamic Events that put the whole thing together

In case you missed the announcement, the sessions for the Microsoft Project Conference have been released with some stellar speakers and sessions planned. If you’ve not registered yet, head on over to msprojectconference.com now and do so immediately. ;-)

Join over 1,200 Project Managers, Executives and Technology Professionals from different industries to learn about the powerful capabilities included in Microsoft Project and our project and portfolio management (PPM) solution, available on premises and in the cloud. Earn professional development units (PDUs) for attending! Nearly 100 sessions are now available at msprojectconference.com, and it’s time to start finding the content that’s best for YOU.

I am looking forward to coming out to Anaheim and talking all things workflow and Project Server with you :)

Yep it’s true, the Project Conference is coming again, this time in early February in sunny California. It’s still over 200 days away, but it never hurts to reserve the date in your diary

You can register for updates at www.msprojectconference.com or keep an eye on Jan’s blog (http://blogs.msdn.com/b/jkalis/)

This work by epmsource.com is licensed under a Creative Commons Attribution-NonCommercial-ShareAlike 3.0 Unported License.
epmsource
Create a free website or blog at WordPress.com.